Is this stuff worth the stitch?

I know that there is a significant risk in trying to draw together a very historic craft with technology. But I firmly believe that the upholstery and soft-furnishing sector can greatly benefit from a little tech injected into its heart. The idea to create upholsta.com started back in 2017 after my wife, who trained as an AMUSF upholstery student with the British School of Upholstered Furniture, started her own upholstery and soft-furnishing business. Specialising in the more traditional side of the craft, she soon began getting enquiries which were beyond the areas she wished to pursue (they often related to automotive and marine work) – quickly realising that these requests would be of value to other local upholsterers working in those specialist areas, the upholsta.com idea was born.

The primary focus was to develop a system that directly supported local British based Upholstery & Soft-Furnishing businesses, alongside reducing unnecessary landfill waste and carbon footprints, by re-using and reupholstering existing furniture. Potential clients wanting upholstery work completed, instantly saw the benefit of such a system. Not only did it make them feel good about doing the right thing for the environment, but it also reduced the complexity of trying to find upholsterers for their specific work request and, completely free of charge, they received 2-3 estimates from their local businesses – an all-round win.

The other half of the challenge was convincing upholsterers and soft-furnishers that this system could really help them and their businesses. Rightly so, they appeared sceptical at first glance. At the end of the day, our own rapidly growing family business is the most important thing to us. But the real challenge was the breaking down deep routed locked-in resistance about the use of technology and online presence. Every time we asked a traditional upholsterer what they thought about using technology to enhance their business, the answer was somewhat short and abrupt.

It quickly became apparent that the system we were creating could not be intrusive, but had to be complimentary to what upholsterers were already using. So, we started with a soft launch, initially in our home counties, Wiltshire and Hampshire, inviting local businesses to join us in the quest to future-proof the past for the next generation to enjoy. It went down a storm. With a little refinement of the system and processes, the foundation of the bridge between the craft and tech was built. We knew we had something special when a flood of 5-star reviews began filling the inbox from both the upholsterers and the clients.

Since its launch in September 2020, upholsta.com has proven to be a wonderful alternative to traditional marketing channels, by focusing specifically on the sectors target audience, of which 25% moved permanently online in 2020 alone. It’s the only specific Upholstery & Soft-Furnishing marketing funnel in the UK and we genuinely hope, that like us, you agree that our commitment to invest personal life savings and many sleepless nights, this stuff really will be worth the stitch for the sector in the long run. 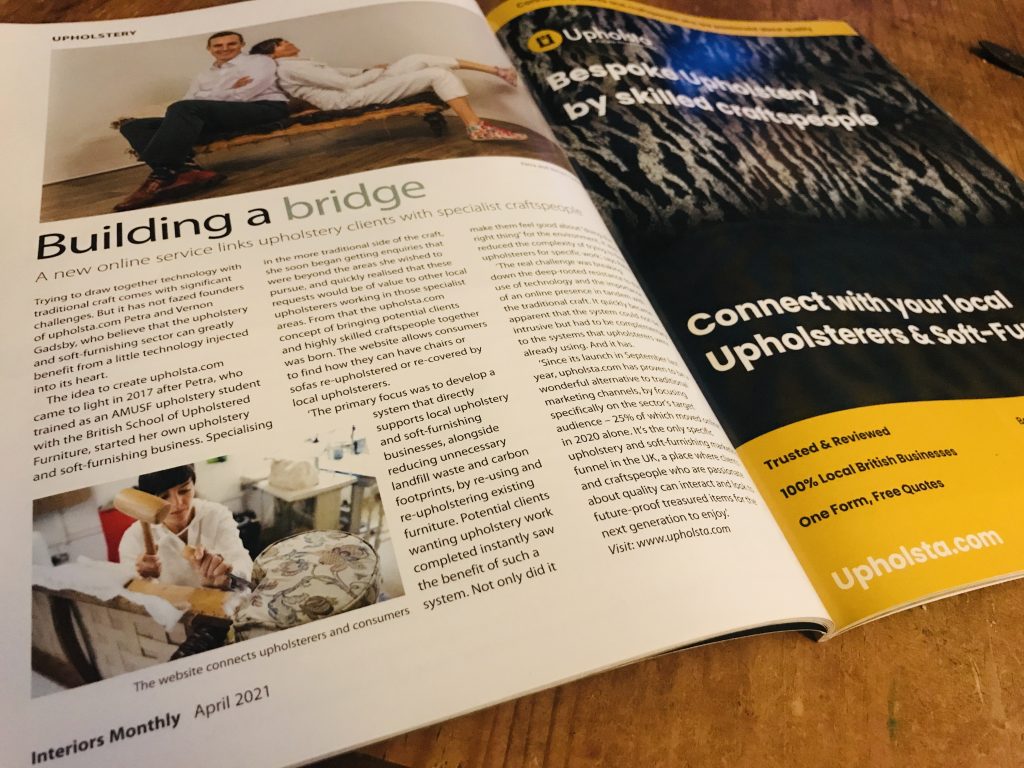 If you would like some upholstery or soft-furnishing work completed by your local craftsperson or you sit on the other side of the fence and would like to join our network to help-future-proof the past. Use the link below.

Find a bespoke upholsterer or soft-furnisher 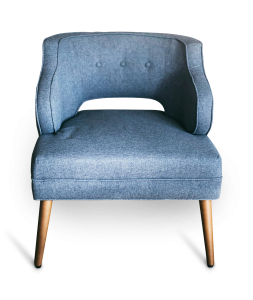 How much does it cost to reupholster a chair? 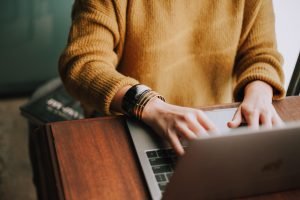 How much does it cost to reupholster furniture UK?

We use cookies on our website to give you the most relevant experience by remembering your preferences and repeat visits. By clicking “Accept All”, you consent to the use of ALL the cookies. However, you may visit "Cookie Settings" to provide a controlled consent.
Cookie SettingsAccept All
Manage consent

This website uses cookies to improve your experience while you navigate through the website. Out of these, the cookies that are categorized as necessary are stored on your browser as they are essential for the working of basic functionalities of the website. We also use third-party cookies that help us analyze and understand how you use this website. These cookies will be stored in your browser only with your consent. You also have the option to opt-out of these cookies. But opting out of some of these cookies may affect your browsing experience.
Necessary Always Enabled
Necessary cookies are absolutely essential for the website to function properly. These cookies ensure basic functionalities and security features of the website, anonymously.
Functional
Functional cookies help to perform certain functionalities like sharing the content of the website on social media platforms, collect feedbacks, and other third-party features.
Performance
Performance cookies are used to understand and analyze the key performance indexes of the website which helps in delivering a better user experience for the visitors.
Analytics
Analytical cookies are used to understand how visitors interact with the website. These cookies help provide information on metrics the number of visitors, bounce rate, traffic source, etc.
Advertisement
Advertisement cookies are used to provide visitors with relevant ads and marketing campaigns. These cookies track visitors across websites and collect information to provide customized ads.
Others
Other uncategorized cookies are those that are being analyzed and have not been classified into a category as yet.
SAVE & ACCEPT